This coin measures 28.4 mm of diameter. The picture is for illustration only. You may receive various design from our selection.

This product is a selection of random years and design, depending on our current stock availability.

As the Double Sovereign £2 coin has featured a range of designs over the years, so you may not receive the exact coin as pictured, but rest assured you will receive a great looking coin.

The reverse design remains the same as the gold sovereign. It features Benedetto Pistrucci’s design of St George slaying a Dragon. The year of mintage is visible in exergue beneath the horse picture.

Why buy a Gold Double Sovereign ?

This 2 pounds british gold coin is free of Capital Gain Tax (CGT). Therefore, it is ideal for UK investors.

This £2 british gold coin contains 14.63 grams of fine gold. This equals to the fine gold content of two Full gold sovereign. Moreover, it is made of the same 22 carats gold than the traditional sovereign.

The Royal Mint issue annually the 2 pound gold sovereign since 2001. The Double Sovereign £2 gold coin features a range of different designs over the years.

From 1980, the Royal Mint produced and marketed actively coins for collectors. The Double Gold Sovereign was part of this issue, and featured various design. This coins is also known as the “£2 British Gold Coin”.

The Royal Mint issued a very small number of Double Gold Sovereign for the Coronation of Elizabeth II. These coins were part of Proof sets. However, the Royal Mint never issued those to the public.

In total, the Royal Mint issued 11 different dates of gold two pounds sovereign between 1820 and 1879. Only 4 dates were available in circulation versions and quantities.

The Double Sovereign first appeared in 1820, during the final year of the reign of George III. This extremely rare piece was not struck for circulation. It was a pattern coin only. The obverse of this memorable coin shows the bust of George III facing right, wearing a wreath. The legend “ GEORGIUS III D G BRITANNIARUM REX F D 1820 ” surrounds the portrait (see picture below). 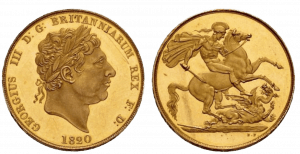 The Double Sovereign was part of occasional mintage of the British currency from 1823 to 1996. It was firstly used as British currency in 1823, during the reign of George IV. Moreover, some Proof type coins were issued in 1824, 1825, 1826 during George IV reign.

However, the Double Gold Sovereign was rarely minted as a British currency in the past. Rather, it was intended for collectors, through Proof sets. Only Proof coins were issued in the next years. These include:

The only Gold Double Sovereign issued for circulations as British currency were:

Since 1997, the Double Gold Sovereign is minted each year.

Gold Sovereigns are the Royal Mint’s flagship product with the Gold Britannia. They combine traditional manufacturing with symbols of Great Britain’s history.

Official Distributor for The Royal Mint